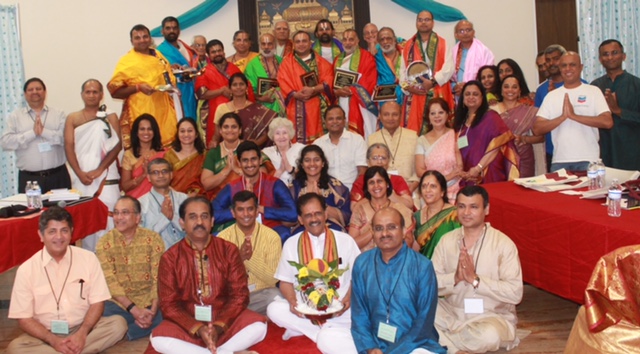 Hindu Temple of The Woodlands (HTW) on July 14 and 15, 2017 hosted the 6thAnnual Hindu Mandir Priests’ Conference at its beautiful temple in its far northern suburb of Greater Houston. Priests from as far away as Minnesota and Massachusetts participated in the conference along with priests, community members, and youth from the Greater Houston area and elsewhere in Texas and the USA. The conference was initiated six years ago by World Hindu Council of America (VHP-A) as a part of the Hindu Mandir Executive Conference.

This year’s theme was “Temple’s Role in Educating Our Youth in Spirituality”. The vision of the conference was to promote the sustainability and advancement of Sanatana Dharma by making Hindu modes of worship meaningful and relevant for the younger generation of Hindus.

To help the priests attending the conference to better understand the needs of the children, teens, and young adults, a number of local youth volunteers had the opportunity to ask questions of the priests in an open session, as well as provide suggestions as to how their needs can be better met by the priests and the mandirs.

The youth wanted to know what importance the precise dates and times for various events had and what the consequences for not following those were. Others wondered why they should wear traditional Hindu dress when visiting the temple. In response to a question about whether daily prayer is important, one of the priests, stating that it was important, also indicated that even taking two or three minutes for prayer before leaving home and starting the daily routine would be beneficial.

Several of the attendees mentioned the fact that many of the priests are not proficient in English is an impediment for priests and youth to communicate directly. A number felt it was appropriate for temples to provide opportunities for priests to learn English while others were of the view that also the children should be taught their “mother tongue” at home by parents so that communication with priests might be in an Indian language.A number of temples, including HTW, also offer language classes for children and youth.

Teaching the basics of Sanatana Dharma and its practices by parents and well as in various temple classes was also emphasized by a number of attendees and implemented in many temples. Many of the priests insert a few sentences in English about the various steps of the rituals as they were performed, feeling it was beneficial to all devotees, not just to the youth.

Other sessions of the conference provided opportunity for the priests to learn about the challenges found in variousmandirs and ways in which the challenges were met. The priests, other attendees, and youth all benefited from their interactions and proposals by some of the speakers including representatives of VHP of America and Hindu University of America who are jointly developing an online chaplaincy certification program.

All the attendees appreciated the hospitality of the host temple.One of the attendees“complained” that the food was so tasty he over-ate! Others were very impressed that the temple volunteers prepared all the food and did not have it catered. The opportunity to prepare the food while chatting and enjoying the comradery was an added benefit for the volunteers themselves.

Other volunteers helped with logistics, program planning and scheduling, overnight hosting of the priests, and more. HTW has become known as a temple with a very strong volunteer base and a commitment to service to the community.

Both the planned chanting by the priests as a group at the beginning of the conference and Saturday morning, as well as the spontaneous group chanting, gave a very special atmosphere to the conference. One of the community workers who attended mentioned how great it was to be in the presence of all the priests from the various temples receiving blessings from them all on his birthday!

A special feature of the conference was the honoring of the priests with twenty or more years of experience as priests in America with the Archaka Bhushana Award. In addition, all the presenters and all the priests attending were recognized.

The conference’s success was due in large part to the cooperative efforts of the World Hindu Council of America (VHP America) and HTW. Volunteer leadership and interest of the priests and community members, including youth, helped make it a success that other temples and communities will strive to emulate.

The Hindu Temple of The Woodlands was pleasedtohost this conference. Hindus of Greater Houston, sponsors of the first community-wide Krishna Janmashtami celebration in North America, generously donated to HTW to help meet the expenses of the conference. Jagan Allam, Chairperson, and Mukesh Mittal, President, gratefully accepted the check.

The Hindu Temple of The Woodlands is located at 7601 S Forestgate Drive, just off Woodlands Parkway, in The Woodlands (Spring), TX  77382. Established in 2005 and inaugurated in 2011, it serves the religious, cultural, educational, and social needs of the surrounding community. It also provides services, such as five free yoga classes per week to non-Hindu neighbors and donations of food, clothing, and other items to the less fortunate through local non-profit agencies. More information is on the temple’s website, www.woodlandshindutemple.org.