Governing Council (GC) – the main policy making body of the Parishad. Meets annually to review the progress of programs/projects and plan for the future. Members elected from different regions for a period of three years. With over 100 elected members this is the National body that sets the direction for the Parishad.

Executive Board (EB) – Executive Board (EB) – This is composed of all the Corporate Officers. The term “Corporate Officer” refers to the following office bearers of the Governing Council:  President, Vice  President, General Secretary, Joint General Secretary, Treasurer, Organizing Secretary and such other officers as may be created by the Governing Council to handle the administrative needs. The charter of this group is to attend to the day-to-day operations of the Parishad, within the guidelines and directions set by the GC.

Chapter Presidents/Secretaries – Officers of the local chapters of the Parishad elected by the local members. Form a part of the extended GC and participate in the annual meeting.

Advisory Board – Ex VHPA presidents and other selected senior members of the community constitute this elite board that counsels the GC on various matters including its long term vision and direction.

National Projects Directors – The national projects are executed by a committee of members drawn from the GC and the various chapters. The Director facilitates the formation of the team, setting of goals and objectives, communication and reaching out to the community. 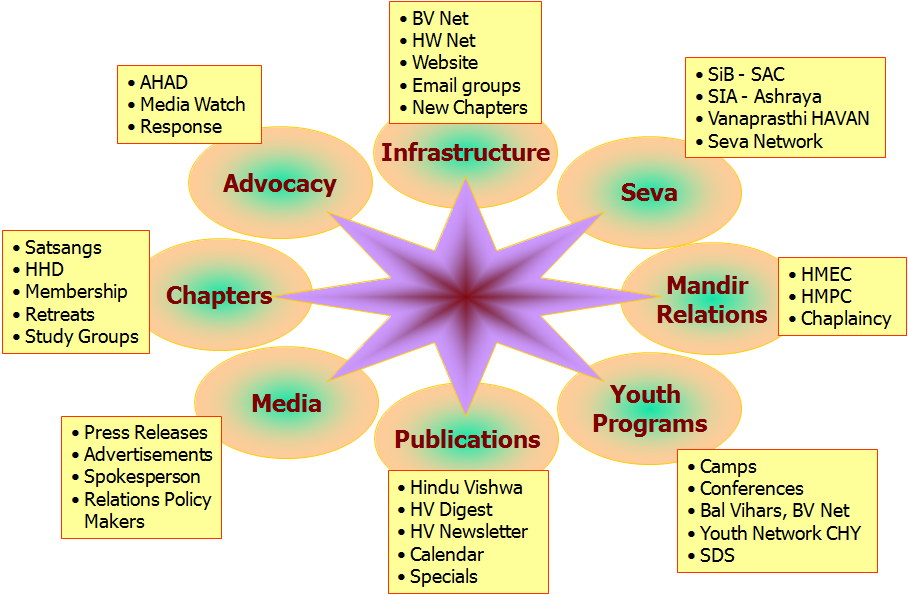 Regular, proactive, spontaneous, open, constructive, supportive communication at the organizational and personal level, is the key to the growth and success of VHPA.  This communication is achieved in various ways through: