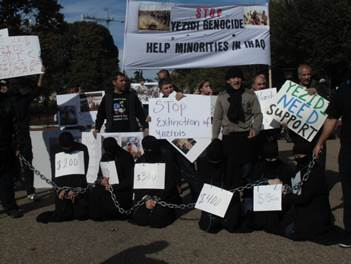 The Yezidi in Iraq, who trace their religious-cultural to India, are facing an existential threat. According to the news reports, ISIS is targeting to exterminate and/or enslave them. Some of them have escaped to the Sinjair mountains in Northern Iraq where they are trapped. Unless they are rescued very soon we may witness Yezidi genocide.

Several activists both from Hindu and Yezidi communities are working hard to raise awareness and bring both communities together with activities such as prayers at Hindu Temples around the world, fund raising to provide desperately needed supplies in winter at the camps in the desert, building bridges with Governments to provide support and helping raise their voice in many forums (e.g. UN).

But it is not enough. They are counting on our help in any possible way.

Prior to the onslaught of the current war, it was estimated that there were around 700,000 Yezidi living in the Northern Iraqi regions. As of this date, not including those who are unaccounted for (missing and presumed dead) the numbers of those surviving are much less than 500,000 with 210,000 known dead. Half a million surviving are homeless with winter coming within a few weeks and no winter clothing to keep them from the elements. According to an article in the Kurdistan Tribune 11 of the Yezidi refugee Camps are located in several areas between Sinjar and the Turkish borders. These refugees in Northern Iraq, Turkish border and Syria are in urgent need of the following:

Your shopping cart is empty.