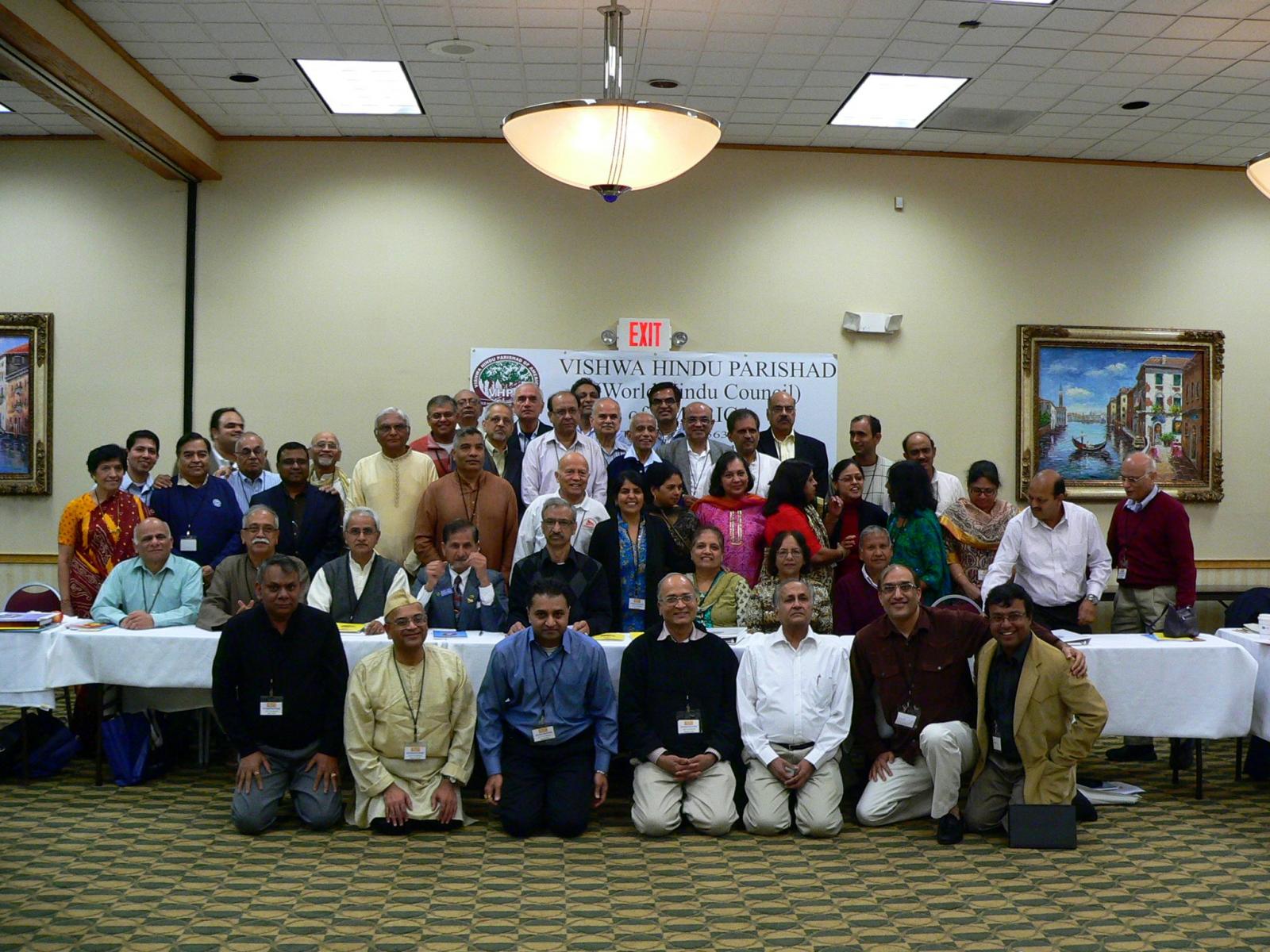 The World Hindu Council of America (VHPA) vowed to renew its efforts to promote the Hindu ethos and advocate the cause of Hindus in the United States and around the world, at their annual governing Council meeting in Detroit, Michigan. Organized by the Detroit chapter of VHPA team, lead by Arjun Soorya, delegates at the three day event analyzed activities of the past year, and charted out their strategic and operational initiatives for the coming years.

The three day event was kicked off with a welcome address by the local VHPA leaders Yash Lakra and Arjun Soorya followed by Ekatmata Mantra and Bhavgeet. The evening ended with a lively panel discussion focusing on the biases in perception and communication that the Hindu community faces. Early on Saturday, the Governing Council elected their new office bearers. Bibek Das, Parag More, Naresh Chand, Anit Gupta, Basant Tariyal, Kamlesh Patel, Ajay Jain, Kaushik Mitra, Ravindra Shukla, Ravi Tetambe, Prem Garg, Anju Preet.
Abhaya Asthana from the Boston Chapter (and the current General Secretary) was elected the President, and Sanjay Mehta, from Pittsburgh, the current Joint General Secretary was elected the New General Secretary. The rest of the morning’s program, covered sessions on different topics, important to the three million strong Hindu community in the US. Among them were presentation on the Hindu Mandir Executive Conference (HMEC), a unique project of VHPA that brings together more than 700 hundred Hindu temples & organizations across America and the HAVAN project. HAVAN is a unique effort at caregiving and community support for and by the elderly community. The “relations and outreach” team detailed out the need for public awareness and outreach work in support of the Hindu community around the world. Specifically, the continued annihilation of the Hindus in Pakistan, Bangladesh and Malaysia found mention in the discussions.

Several sessions focused on VHPA’s community service (SEVA) projects. Support a child (SAC), Sevapedia, and the relief efforts to support the Bhutanese Hindu community which has been exiled from their native country of Bhutan due to continuing religious persecution found specific mention. Saturday evening saw an enthralling display of Odishi, a thousand year old dance form that originated in Hindu temples of Odisha (India), followed by a community dinner with the Hindu community of Detroit.

At the end of the event, the Council passed the following resolution
1. VHPA condemns the Terror attack in Nairobi, Kenya by Islamic radicals.
2. VHPA condemns communal violence (PCTV – Prevention of Communal Violence Bill) being brought in India by the current UPA government.
3. VHPA condemns the relentless Religious Persecution of Hindus in Bangladesh.
4. VHPA applauds the fact that Diwali is being celebrated as a mainstream festival in the United States and congratulates the White House for celebrating it this year.

VHPA is of one of the oldest umbrella Hindu organizations in North America. The annual governing Council meeting is a window into the growing role of the Hindu community in the United States as a harbinger of sustainable social and economic change. As the barriers of ethnicity and knowledge break down, organizations like VHPA find an increasing role in framing the discourse on thought-leadership and the narrative of ‘universal brotherhood’ in the United States.

VHP of America is a non-profit, 501(3) (c), tax-exempt organization. VHP of America helps the poor and needy people all around the world regardless of their race, religion, ethnicity, color or gender. Please visit www.vhp-america.org for further information.