With increasing vaccinations and lowered risks, life is starting to return to normal, although, with caution. But in February, when the organizers started planning for Hindu Heritage Day, the situation was still unstable. They started thinking about how this would affect Hindu Heritage Day in this climate. It soon became apparent that if it were to be held, it would have to be in a different forum. They would have to think outside the box. A plan was formulated, and the result of their collective thinking came to fruition. Hindu Heritage Day 2021 arrived on May 22, 2021 at 2 PM, in everyone’s homes, on the small screen.

The program started with Shankh Naad and Deep Prajwalan, both in peoples’ homes. All items were pre-recorded, and broadcast simultaneously on Zoom, and live on Facebook and YouTube. Children from local Bal Vihars recited the Ekta Mantra, and the National Anthems of USA and India. The Cultural Program began with children from VHPA Bal Vihar chanting shlokas, followed by an invocation dance to Devi Saraswati. The emcees Sumana Hatwar and Ashish Chhabra expertly led the audience through performances by various dance and music schools, which were specially pre-recorded for the program. 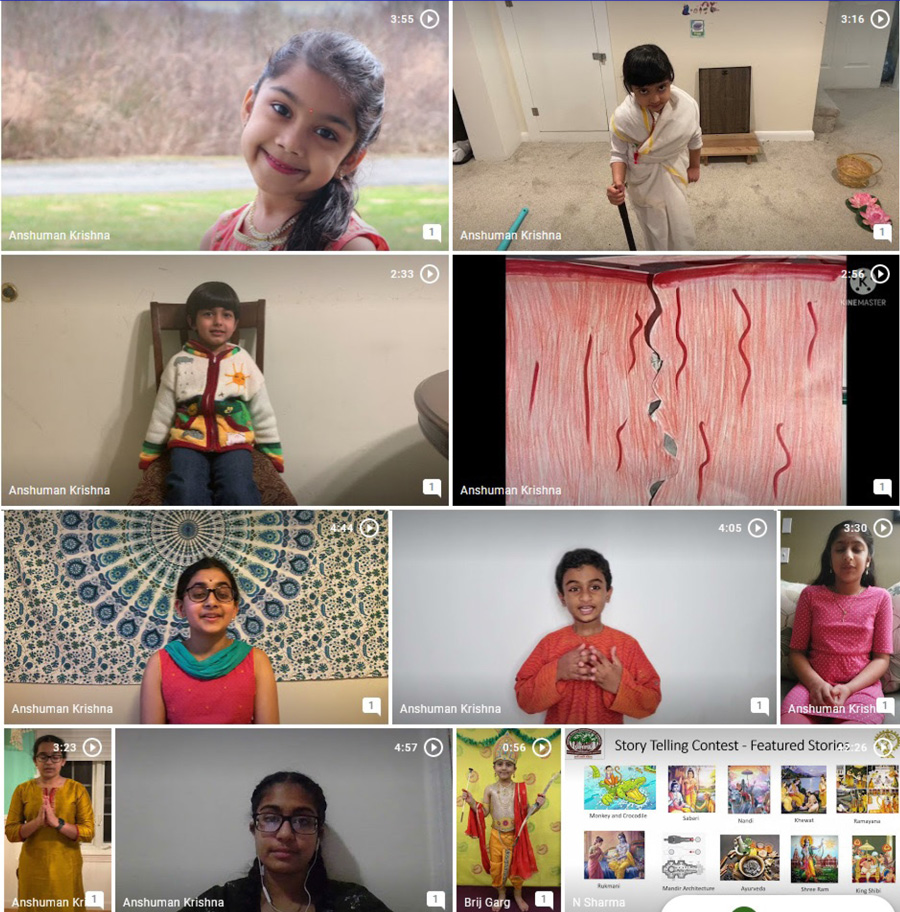 The day saw a lot of innovation. Dancers and singers performed while maintaining social distance. They danced and sang in peoples’ back yards, in parking lots, on white boards, in parks, and in their homes. Special attention was paid to backdrops, adding to the uniqueness of the program. Performing in unconventional places also brought a lot of variety and beauty to the dances. Blooming bushes, and colorful flower beds added to the ambience and made the performances come to life. Through it all, one could see that a lot of effort was taken to maintain safety.

The Cultural Program was followed by a Storytelling Contest. This was the first time such a contest was organized in the New England area. Children from the New England area were invited to tell their favorite story, talk about someone who had inspired them, a favorite saying, parables, the list of topics was endless. The purpose was to keep the children rooted to their Hindu heritage, and have fun learning about Hindu tradition. There were 42 entries in all, with children’s ages ranging from 5 to 14 years. It was a fun family activity, with parents as directors and videographers, and the children as award-winning actors. Children as young as five years old dressed up as their favorite character and narrated their story. One five-year-old girl narrated the story of Shabari, who lovingly fed pre-tasted berries to Sri Ram, while a seven-year-old boy narrated the story of the Monkey and the Crocodile from the Panchatantra, with great gusto. There was a puppet show with paper puppets narrating the story of King Shibi, all handmade by a brother and sister duo. Topics ranged from stories from Ramayan and Mahabharat, to temple architecture and Ayurvedic skin care.

Two judges Meenal Pandya and Venkat Pula viewed all the videos painstakingly and picked out the prize-winning videos. But the videos were so engaging that everyone agreed that all the children were winners. The two storytelling emcees, Tanushree Nekenti and Aneeswar Bairavsundaram, quite young themselves, introduced each of the ten finalists’ videos, adding to the enjoyment of the story being told.
Due to the nature of the program, everyone agreed that they missed the lip-smacking food and special shopping, and were sad that they would have to wait a whole year to experience the Mela in all its colors and varieties.

The audience thoroughly enjoyed the show. Comments from the audience showed the appreciation for the participants. One person said, “I feel so overwhelmed by these young kids talking such deep things after being born and brought up in America. It is a great achievement.”
“It was very well run; thanks so much for putting it together. The MCs did great, and the videos were incredibly fun to watch!” said another. A parent of a Storytelling contestant said, “Another aspect which I can relate to is how this helps the kids with the presentation skills and public speaking.”

The program ended with addresses by the two Presidents of the VHPA Merrimack Valley and Massachusetts chapters, and a vote of thanks. Everyone agreed that they were looking forward to attending the next Hindu Heritage Day in person next year.

To view the program in its entirety, please visit: