This is a scholarly compilation on Sanatana Dharma/Hindu Dharma, published by the board of trustees of  central Hindu college in Benares/Kashi in 1916. The book was written to be used as a textbook needed to give education on  Hindu religion and ethical training along with western education plan used in the schools. This book includes most divergent forms of Hindu thoughts but exclusive enough to leave outside of it, forms and though which are non-Hindu. This Hindu religious and ethical training includes wide, liberal and unsectarian character, while at the same time it shall be a definitely and distinctively Hindu. Intended audience of this book is high school and above students. 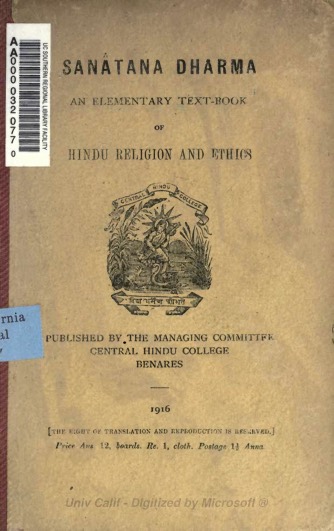