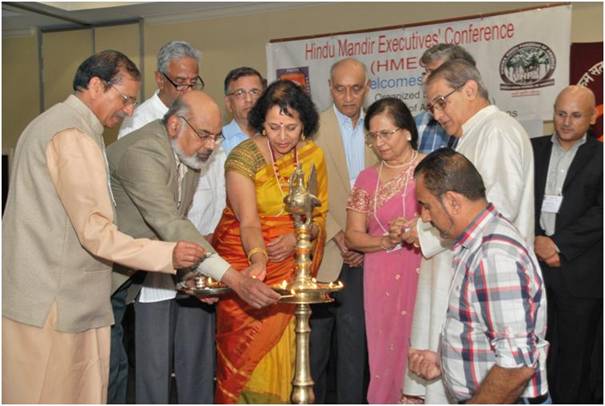 There were over 25 Grand Hosts and Co-Hosts of the conference mainly from USA and Canada. Some 200 adult and youth delegates drawn from over 70 organizations and 5 countries participated in the conference.

The theme of the conference was: Awareness and Awakening: The Future Role of Hindu Mandirs and Institutions. HMEC 2016 provided a platform for stakeholders like mandirs, other Hindu organizations, pundits, gurus, teachers, sanyasis, scholars, activists, and practitioners and non-practitioners to celebrate, plan, implement, monitor and evaluate the state of Dharma in North America and the Caribbean and come up with strategies and action plans.

In the inaugural session on Friday, 16 September, a moment of silence was observed in the memory of Shri Pramukh Swami Maharaj Ji. A great thought leader and inspiration to the masses; he dedicated his life to the spiritual upliftment and selfless service of society by exemplifying, “in the joy of others, lies our own.” Paramacharya Sadasivanatha of Hinduism Today presented the Hindu History and Megatrends in America leveraging multimedia, which was followed by a pictorial Journey through Spiritual India shared by Robert Arnett. In his inaugural address, Swami Pratyagbodhananda of Arsha Vidya Gurukulam spoke on, ‘The Future Role of Hindu Mandirs and Institutions.’ Amol Yadav and Lauren Valentino of Duke University shared their experiences and connected gyan yoga to youth ambassadorship. Ami Parikh from Vatsalya Gram, India spoke passionately and called all to seek within. The session ended with blessings from local priests.

Since its inception, HMEC has bred many worthwhile projects and initiatives. A summary was presented to share progress with the audience. Among them were: HMPC (Hindu Mandir Priest Conference), WHC 2018 (World Hindu Congress), SDS (Bhagvad Gita Sanatan Dharma Scholarship), Publication of Sanskar books, Gita Distribution, HAVAN (Hindu American Vanaprasthi Network) and Hindu Seva Diwas. The launch of the Vrat book was the main highlight this year.

A number of parallel sessions were held to cover large number of important and relevant topics. The titles included:

· Respect for/Emphasis on Education of Rituals

· Challenges and Opportunities with Current Programs

· Challenges of Hindus Growing up in Diaspora

Additionally, there were three workshop sessions for the Youth and Young Adults, designed and conducted by the Young Adults: Self-Improvement Through Shaastras Workshop, Explaining Dharma – Answering Tough Questions about Hindu Dharma, Ask Me Anything – Guest Speaker Series.

Tweets from CHY (Coalition of Hindu Youth) can be viewed at www.twitter.com/chynetwork #HMEC2016)

At the Saturday Sept 17th evening Gala Dinner and Cultural program, Consul General of India Mr. Nagesh Singh praised the efforts of HMEC towards bringing Hindu Institutions on one platform.

In closure, the eleventh HMEC deliberated on the following resolution:

1.     It is hereby resolved that HMEC will establish ‘HMEC Sanatan Dharma Seva Ratna’ award in the honor of Poojya Swami Dayananda Saraswati.

Subsequent action items will be worked on actively in 2016/2017:

1.     Hindu Seva Day – Seva in America will focus on 4 key areas: education, society, welfare and the environment. HMEC appeals to the Mandirs and Institutions to sign up and be part of the team or choose a particular project to work on.

2.     Hindu Mandir News Letter will be created to disseminate information that is timely and relevant to all subscribers. It will promote unity while highlighting the diversity of the mandirs and institutions and be a medium for thought leadership.

3.     A Visitor’s Guide for Mandirs will be designed for the use of mandir visitors with the intent to simply share religious and cultural significance of the mandirs and the practices.

4.     Shared resources add consistency to the core teachings of our Dharma and therefore, common Bal Vihar resources will be created for accessibility, conformity and accuracy.

5.     HMEC approved the formation of a committee to work on ‘HMEC Sanatan Dharma Seva Ratna’ award.

Mandir representatives from Indianapolis, IN announced the hosting of HMEC 2017 and welcomed everyone to participate. The concluding thoughts were delivered by Swami Nikhilananda of Radha Madhav Dham, Austin, TX.

“HMEC was an important experience that was eye opening towards the inner workings of a temple. I am honored that HMEC allowed me to intern and be a part of this unifying conference. ” – Nina Jain, Hindu Temple of Central Indiana youth group, IN

“HMEC offered me knowledge and intellectual debate on several aspects of growth of Hindu Dharma. It was refreshing to get feedback from young adults.” – Devyani Desai, Hindu Temple, Tampa, FL

“For me HMEC is a re-union of my extended Hindu family. Like in the past, 2016 conference was enriching and fulfilling for me, wife and son. We look forward to next conference in Indianapolis”.  – Sudershan Pasupuleti, Shiv Shakti Temple, Edinburg, TX

“This, my eighth HMEC gathering, was proof that practice makes perfect. More importantly, the many voices spoke of a one vision for the future of Hinduism in America, a vision that year-by-year the determined HMEC members are manifesting into reality, turning talk into small triumphs.” – Paramacharya Sadasivanatha, Hinduism Today, Hawaii

The vision of HMEC is to be the network of Hindu Organizations for effective leadership generation to generation in North America. Representatives from Hindu temples meet to deliberate and solve issues collectively. This conference provides a great opportunity to community leaders to learn from each other and ultimately grow as one community. The World Hindu Council of America (VHPA), founded in 1970 and incorporated in the state of New York in 1974, is an independent, nonprofit, tax- exempt and volunteer-based charitable organization serving the needs of Hindu community in USA. It aims to build a dynamic and vibrant Hindu society rooted in the eternal values of Dharma and inspired by the lofty ideal of Vasudhaiva Kutumbakam, i.e. the entire creation is one family.  For more information on VHPA, please write to vhpa-office@vhp-america.org  or visit www.vhp-america.org

Hindu Mandir Executives’ Conference · An Initiative of VHP of America